Understanding the Principles of Reliability

Abstract: The Reliability Approach… “Something understood and practiced by engineers and highly specialized technicians,” is apt to be the first reaction of the line supervisor, “certainly not an area where I can be expected to become involved.” Although this reaction is understandable; nothing is farther from reality. Let’s explore why in this paper. Please read until the surprising end (I know it is lengthy) and you will find that these Reliability Principles apply to any industry, any where at any time!

First, what is The Reliability Approach?

The Reliability Approach is simply a systematic approach to keeping the plant running in an efficient, profitable manner.

Many line supervisors and hourly personnel probably think of The Reliability Approach as another way of saying “Preventive/Predictive Maintenance [PPM],” such as oiling machines, checking for hot bearings and stopping the machine just before it breaks. However, the Reliability Approach is much more than fixing something just before it breaks down.

Maintenance alone cannot overcome design or operating deficiencies, it can only react to the result of these problems such as breakdowns, or loss of bearings, turbine wheels, or heat exchanger tubes.

The Reliability Approach can overcome these because it is a concept of integrating the human being, equipment and the process into an efficient system that performs for the optimum benefit of all concerned.

This winning concept (once concerned with engineering plants and processes for “runnability”), in plant operations, can predict trends and trouble spots with specific approaches created to deal with potential problems before they ever surface. Primary failures, such as an overheated bearing or a pitted heat exchanger tube, will be detected and corrective actions taken before secondary failures, such as loss of shafts or wheels, or rupture of heat exchanger tubes, can occur.

So where do line supervisors come in? Right where it all happens! Management can decide to install reliability systems, engineers can be employed to design such systems, but it’s only the line supervisors and their people who can make it work. They control the day-to-day operations of the system in their particular areas and they are in the best position to observe the system in operation, to note any deviations, and to take immediate action and communicate their findings and corrective suggestions to their supervisor. Line Supervisors are also in a vital position to contribute to formation and success of this approach in their plant.

You will find that three factors are involved:

Starting with Process Reliability, this factor has a major day-to-day impact on the plant’s profitability, environmental integrity, and safety and loss performance. It is in the process that line supervision brings together the reliability of their equipment and people to establish a plant performance target. By comparing actual performance to this target, information is fed back to supervision which helps them to adjust the process for improvement or perhaps recognize the need to improve the target.

As for the Equipment Factors, line supervision is looking both to the reliability of their equipment to perform satisfactorily under expected operating conditions and to the maintainability of this equipment. Reliability speaks mainly to the rate at which our equipment fails, while maintainability is concerned with the amount of time required to restore our process to operation once equipment has failed.

We can assist in improving reliability to equipment by providing information on equipment failures which could help to determine what caused these failures and to suggest what might be done to reduce the number of failures in the future.

We can help in the maintainability of equipment by looking for the first signs of failure so that corrective action can be taken before the failure becomes a catastrophic failure.

People, however, are the most important factor since they design and operate our plants and processes, and are responsible for our successes and for our failures. People must also monitor our operations to assure continuity and profitability.

The human is typically the cause of 30-50% of all process interruptions. Since our primary responsibility is leading people to accomplish our department’s assigned goals, the manner in which we understand and prepare our people will, to a great extent, determine the success or failure of our operation and subsequently the entire operation of the plant.

People do not make mistakes because they want to – other factors are involved such as: inadequate training and motivation; poorly designed equipment layouts; undue employee job stress; and unnecessarily bad or dirty jobs and workplaces.

Perhaps we have little control over deciding who works in our department, but we should do everything possible to see that all of our people are placed where they will be most productive and satisfied.

We can do much to assure that our people’s needs are satisfied by letting them know that we can respect them as individuals and welcome their questions and suggestions. They can be extensions of our eyes and ears in the workplace and can provide an invaluable source of equipment and process information which can be translated into actions to keep the people, machinery and process system functioning productively.

How can we participate in the Reliability Approach?

As time goes on, our plant management will be developing programs encompassed by the Reliability Approach. These programs will be tailored to our specific plant and will be developed only where our management sees a need for such programs to aid in meeting our plant’s objectives. The programs might cover the following areas, some of which may include techniques and practices new to us and will require additional materials to enable us to participate:

2. Root cause analysis of failures

7. Application of ergonomics or, as better known, human factors engineering.

8. Working together with our people can help make our operation more reliable by addressing ourselves to such things as:

Remember the most important of all your responsibilities is to see that your people are properly trained to do their jobs safely and efficiently. Keep in mind that an injured person, just as much as a broken machine, represents failure.

The entire previous article was written by my father, Charles J. Latino, in 1972…verbatim! Our purpose in re-introducing one of his pioneering papers was to demonstrate the enduring principles of The Reliability Approach. Here is a pic of Reliability team…I think the fashion statements made will confirm the time period to be in the 70’s (lol). 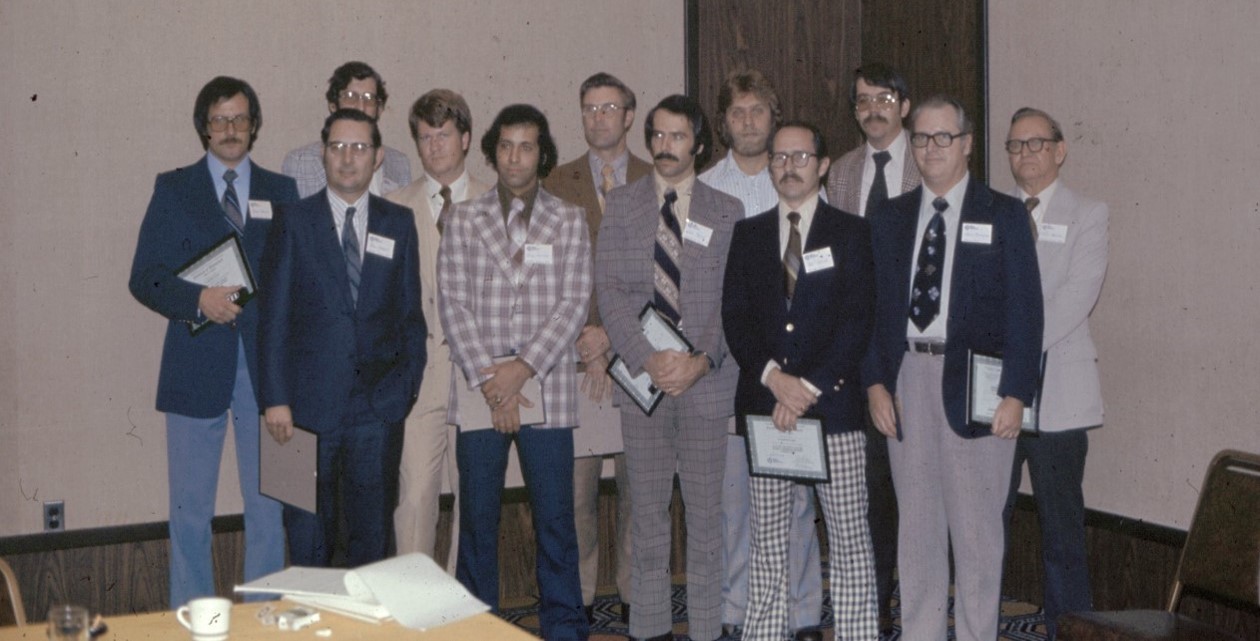 In September of 2007, we lost our father, boss and best friend. The manufacturing world lost the Father of Reliability and a true pioneer.

Charles was a Chemical Engineer with a natural curiosity for why things failed. He was enamored with the U.S. space program and its ability to put a craft into space and eventually on the moon. He studied the reliability aspects of the space program and aviation in general and never let up on the faith that there were underlying Reliability principles that were transferable to any industry.

Charles started as a junior engineer in 1951 with a company called Allied Chemical and Dye Corporation (through numerous mergers and acquisitions today they are called Honeywell). He always espoused his reliability ideas, but we all know how that goes over as a “green” engineer in a manufacturing plant. He always used to say that in the 1950’s and 1960’s U.S. manufacturing was making so much money that no one was interested in hearing about ways to improve the reliability of operations. If it was “made in the USA” it would sell, no matter what the quality of the product.

Through the years Charles proved to be a credible, respected and reliable engineer as he climbed the corporate ladder quickly elevating to the position of Manager of Maintenance and Engineering for one of Allied’s largest plants in the world. Finally he was in a position to put in the Reliability infrastructure he always touted. He did so by establishing The Reliability Approach and all of its facets in 1969.

The corporation caught wind of his team’s initial successes and, as a last resort, sought his assistance to help save their nylon business that was on the brink of failure. The particular plant in question saw its production drop by 50% over a 6-month period and no one could explain why. All of the experts, both internal and external were called in to help solve the problem to no avail. If this plant were to fail, two other local plants feeding it raw materials would also fail putting 5,000 jobs at risk. Plant management did not know what else to do and approaching Charles was a last resort, but they had nothing to lose.

Charles made a deal (he was quite the deal maker!). He told plant management that he needed their complete support if he were to accept the project. This means that when he needed resources, they were provided (both money and people), no questions asked. He also set a condition, that under no circumstances would people be laid off because the facility became “reliable”. Charles was of the mind that there were plenty of jobs available in Reliability that could not be filled because there were so many people fixing things. When things were not failing, these fixers could be moved over to more challenging, proactive jobs in Reliability.

Charles said that if he was not able to turn this plant around in a year’s time, he would resign from his tenured position at Allied. For a man with 5 young children (me being one of them) this was quite a risk but it demonstrated his faith in The Reliability Approach and its possibilities to save the 5,000 jobs on the line.

Conversely, if he was able to turn the plant around in a year, Allied would fund a corporate Reliability Engineering R&D effort and let him lead it. This would allow him to expand his Reliability technologies in the areas of equipment, process and human reliability and spread the principles to all of Allied’s plants around the world via the setting up of Reliability Departments.

The rest is pioneering history as the plant was turned around in a year from being the worst performer in the world to the best! The paper presented here was one of those introducing The Reliability Approach to Supervision and acknowledging their key role to the success of any such effort.

Had I not revealed this was written in 1972, couldn’t we have easily assumed it was written today? The power of The Reliability Approach concept has no time boundaries.